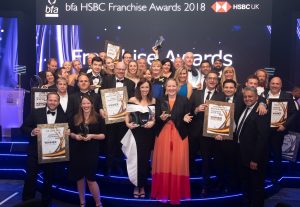 Known as the biggest and most influential event in the franchising world, Razzamataz Medway was delighted to be among the winners at the British Franchise Association (bfa) Awards 2018.

Hayley Limpkin, Founding Principal and now co-owner of Razzamataz Medway was shortlisted by the esteemed panel of judges in the ‘Lifestyle Franchisee of the Year’ category and took the title on the night, beating off stiff competition.

Hayley opened Razzamataz Medway in September 2010 after working in a lead marketing agency for seven years. She decided to swap the busy corporate life for her dream of owning her own theatre school. Having studied franchising as part of her Masters, she was attracted to the strong and credible brand that Razzamataz has.

Members of the bfa judging panel said: “Hayley identified a strong passion and franchising enabled her to achieve success in business where she herself admitted she may not have been able to as quickly had she have done it herself. Faced with significant challenges in her personal life she then had to think strategically and identify a way in which she could balance home and work life. Not only did Hayley do so successfully but she became more impactful in the process. This wasn’t an example of someone achieving a balance and being comfortable, it was an example of achieving a balance and refocusing on continual expansion in tandem.”

The judges and everyone who attended the Awards, including other franchisees and franchisors, were so impressed with Hayley, that they also chose to give her the title of ‘People’s Choice Franchisee of the Year 2018.’

Back to the News

Did you know that we're award winning?